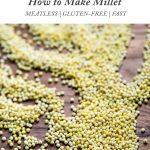 In preparation for my weeknight whole grains class, I partnered with Bob’s Red Mill. This is a sponsored post, but if you were to look at my glass jar lined pantry that’s been filled with Bob’s Red Mill whole grains for years, you’d know my obsession with their quality and whole grain offerings  is unsponsored. I’ve known the team at Bob’s Red Mill for years and am so glad almost a decade ago, my curiosity deepened as I got to see firsthand  at their plant the process of cutting grains or sifting them into large bags to later be siphoned into the ones you and I buy at the store. I interviewed Bob for a story back when the company was still privately held, before it had been given to its employees. I say this because, I trust them and will occasionally partner with companies I think are doing it right. I trust their products to be excellent because that’s the kind of guy he is and ship he runs (plus I love his spirit of welcoming others in, whether leading a marching band up Natural Products Expo West show aisles or at the Bob’s Red Mill plant where he and his assistant Nancy played pianos together as he sang).

Millet is having a moment in the United States but you might be wondering what is millet and how do I cook millet? You’re not alone! In the past, in the U.S., this ancient seed has been more associated with birdseed but it’s been steadily shifting gears as a whole grain go-to for being gluten-free and its versatility.

And, the birds heard the word! This nutritious and versatile whole grain shouldn’t be just enjoyed by our feathered friends.

Did you know this whole grain comes from the same family as rice? In fact, this seeded grass has been called “a weed” that gets mistaken for rice.** But its nutritional profile is much more exciting than the humble rice grain (not that I’m going to stop eating rice). The Whole Grains Council names millet as the sixth most important whole grain in the world.****

Millet goes back almost 10,000 years to China and it has deep roots in several cultures around the world. You’ll see it mentioned in the singular as “millet” but also as “millets” and the seeds of these grass crops are what we eat. One thing I like about the “old becoming new” is an opportunity for open-minded eaters to try new-to-them foods that can become indispensable.

If you like quinoa but are looking vary things up and eat ingredients without as deep of a carbon footprint, consider millet. Did you know half of it grown in the U.S. comes from Colorado with South Dakota and Nebraska making up the remaining windfall?*****

I’m pretty sure you will fall hard for it especially when you see the variety of ways in how to cook millet!

Quite possibly my favorite thing about it is how the flavor can swing sweet or savory with a mild nuttiness that also reminds me ever so subtly of corn.

Did you know that millet is alkaline? That’s an interesting detail if you’re looking for foods that are not acidic (which let’s face it most of the foods we eat in the standard American diet veer more toward acid-producing). It also means it’s easier to digest.***

Unlike amaranth with its excellent protein properties, millet is a good source of protein and excellent source of fiber. It is also high in antioxidants, magnesium and potassium.

This brings me to a larger point about it that I will preface with saying I am not a doctor or RD, nor do I play one on television. Like anything else you eat, variety is key.

But Can I Eat It: Is It Gluten-Free

Cooking Millet Around the World

You can find millet as a common ingredient in Africa, South Asia, and China. In fact, India produces the most millet (almost 11 tons in 2017), followed by a large swath of a gap by Nigeria, Niger, and China.******

When we hear about millet in the United States, typically the kind being referenced is the pearl variety, but other types exist, including proso, foxtail, and finger. Check out a photo of the different types up close and where they are harvested. Millet is a staple in a number of cultures. But first, it had its roots in China.

Lord of the millet has a certain ring to it, doesn’t it? Millet goes back 4000 years to China where an archeologist team found evidence of it as the binder for noodles!

At one time, millet had a central place at the table during the Xia and Shang dynasties (2070-1046 BC) in Northern China. One of the leaders even bore the aforementioned moniker.

Later on, rice and wheat became more prevalent and it took on more of an outlier role, but is starting to see a resurgence. If you look at the Mandarin language, you’ll find evidence of millet’s importance too.**

The prevalence of Chinese recipes on the web that use it is congee (a comforting porridge). When I typically think or have eaten congee, it’s been made with rice, but I can see how millet would offer a different kind of texture.

I, for one, want to go back to before the Han dynasty and reconsider millet’s potential in making pasta. I’ve processed it into a very sticky paste for a burger recipe and can see how it’s a good gluten-free whole grain binder, something that would do well to be explored further.

From China, it is conjectured that millet made its way to Taiwan, India, and on.

Millet’s role in Taiwanese culture is legendary. One legend in Taiwan claims it can come from the heavens, far-off place or underground. There are even religious festivals held for millet and a god / goddess of millet.**

Millet is a key crop in Africa and the two varieties you’ll find there are pearl and finger (one use is for brewing beer). It’s used in two main ways across Africa: as a hearty porridge and also as a pilaf. You can also find it used in flatbread too.

Millet has a place at the table in India as well. There, you can find many varieties of it, but the prevalent two types are finger and pearl (bajra in Hindi). It’s cooked into rotis and sometimes used instead of rice to make biryani. Then, further South, you can find it in dosas, idlis, and upma. One could say that the state of Karnataka is in the midst of a millet ragi revolution.*******

While millet is prepared and eaten in South America, not a lot of documentation is available to see how it’s eaten—perhaps when I’m in South America later this year, I will stumble upon it in a menu. Regardless, I’ll update this section as I can find more data.

In Russia, the primary way I happened upon it being eaten is tucked into a bowl as porridge. This stirs my curiosity (and excitement!) about how the grain traveled from China where they also eat it as porridge (and Africa too!) and if the idea of porridge traveled from there, or if it’s just a natural way one would think about cooking and eating it. Is there a traditional Chinese porridge recipe and does the traditional Russian version mirror it? I found two instances with pumpkin in congee and Russian porridge which got me excited at the possibilities of synchronicity!

How to Cook Millet

Some whole grains you can eat uncooked. Millet is one of them! See the section below on recipe ideas for using it uncooked to add crunch, pop, and a boost of nutrition to your baking.

Prep Ahead or Last Minute

No advance soaking or rinsing required.

Cooking millet is easy making it the kind of weeknight side dish or base to a meatless main dish you can prepare without advance preparation. It’s been described as a thirsty whole grain, so make sure to add enough hydration as these small seeds will plump up significantly while cooking. Bring water, stock (or try chamomile tea!) to a boil. Stir in the millet. Lower the heat and cover to simmer for 20 minutes. Turn off heat. Keep covered and steam for 5 minutes before fluffing.

It resembles a stickier version of pearled couscous when cooked. Its flavor is mild and kind of nutty and corny. Serve it as you might rice or couscous. It does a decent job of soaking up sauces without completely being infused by them like tiny couscous.

That millet can be eaten uncooked is one of its charms. When added to cookies, bread or quickbreads, it adds a satisfying crunch.

Recipes with Millet as a Mix-in or Garnish

Keep it in a sealed container away from light, heat and air. Store it in the refrigerator or freezer, for best shelf life.

In the United States, it can be tricky to find it in big box supermarkets, but you’d certainly see it in a natural food store. It’s sold in bags in the whole grain section of your grocery store or in the bulk section. It’s also sold as flour, typically in the gluten-free section of your market. Or, buy it online.

Did You Know: Fascinating Facts!